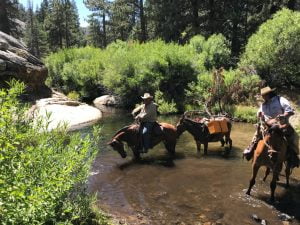 We were a small but mighty crew! Cheryl Reese, Bonnie Searcy and I rode in on Wednesday, August 22nd. We worked on the Clicks Creek Trail on Thursday, clearing several trees. We got back to camp late afternoon. Steve Cozzetto and Robert Anderson were due in any time. By 5:30 P.M. we had given up on them and I started making dinner. We were just finishing up our dinner at about 6:15 P.M. and here they came riding in!! We quickly went out and helped them unpack. They had had a few problems and ended up running late. Roberts poor little mule was wearing his pack around his ears when they arrived! I quickly fixed them dinner and we sat around the table and played a game of Mexican Train. We were in bed by nine!
Next morning we had breakfast and headed out to do some trail work. We broke up into two crews and started lopping. We lopped about three fourths of the Clicks Creek Trail and then headed back to camp.
We had a nice dinner and managed to beat off the meat bees that were determined to eat out pork chops! The rest of the evening we sat around the fire and visited.
Saturday morning we had breakfast and Bonny and I packed up and rode out. Cheryl, Steve and Robert rode to Tamarack and several other spots on the north side of the Little Kern. They had a nice day exploring and trying to find trails, most of which were badly in need of work.
We had a great trip! We made some good memories and accomplished our task of clearing a good part of Clicks Creek Trail! I so appreciate everyone’s hard work and great attitude! 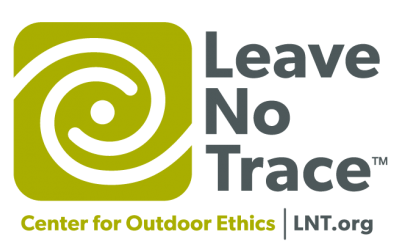