Forks of the Kern Trailhead 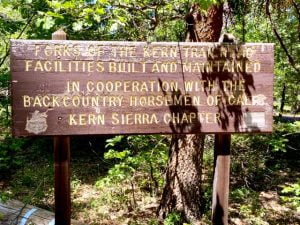 The Kern Sierra Unit celebrated National Trail Day by meeting up at the Forks of the Kern Trailhead on June 4th for a four day work project. It was a bit of a challenge to keep horses, cook food, and all the other required activities for four days at a dry trail head, but a we found some tanks to haul water up there and we had water left over. It was the party of 4 seasons, we had rain, wind, cold, warm, and sunshine yet all bunks and the kitchen stayed dry. It really was a lot of fun.

What we did accomplish was to replace the missing rails on 5 hitching rails and replace the top rails on two corral gates that were chewed almost all the way through. Fixing the hitching rails was easy compared to cutting and loading the rails to bring back to camp. If it weren’t for the young muscles of Garrett Gomez we might still be there! Peggy, Bonnie and Lynn rode down Angel’s Flight, crossed the Little Kern and cut three trees out of the trail and lopped brush in Kern Flats. Meanwhile after the gates and rails were done we went down the trail on foot and before we entered the wilderness, we cut 4 large down trees with a chainsaw, and returned to open some paths through some very long down trees. It was different to do a project outside the wilderness where we could use power tools. A big thanks to Lynn’s great cooking that kept us fueled and Dan’s cobblers that were real treats. Night time fun was stories and card games under the canopies where we stayed dry. Amid all the problems going on in the world, it was sure nice to spend the time in a pleasant place and no worries about the rest of the world with a great group of Backcountry Horsemen doing their part to keep forest facilities kept up for equestrian use. A big shout out to the crew of Dusty Gomez, Garrett Gomez, Dan (Boon) Shuggart, Bonnie Searcy, Peggy Whitaker, Lynn Joiner and Robert Anderson. Mardee Tucker  and Melany Shuggart joined us Saturday. I hope to see you at the next project.